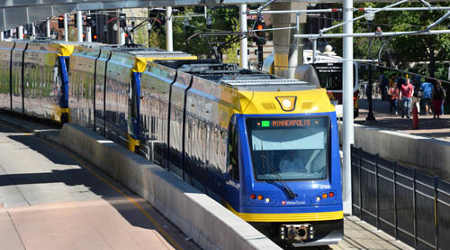 The Metropolitan Council last week rejected all four civil construction bids for the Southwest light-rail transit project due to concerns over price and responsiveness.

The bids were opened in August and represent the bulk of construction work involved in building tracks, bridges, tunnels, stations and other facilities for the project.

Working in consultation with the the project's primary local funder Hennepin County, the council determined the bids were too high for the project, which would extend the Green Line through Minneapolis and into area suburbs.

The council also found "responsiveness issues" with the bids, which means they didn't meet all the requirements of the bid documents, Met Council officials said in a press release.

Staff plan to reissue the procurement in October, with bids scheduled to be opened in December and awarded by March 2018. This would delay the project by four months and move the opening of the line to 2022.

"While certainly this is a setback in our schedule, it doesn't change the importance or strength of this project," said Met Council Chair Alene Tchourumoff. "This is a critical infrastructure project for our Twin Cities region and state, connecting people of all incomes with jobs across the region. The future vitality of our region depends on the build-out of a robust transit system."

The council's decision to reject the bids also will delay the application for a Full Funding Grant Agreement from the Federal Transit Administration. The federal government is slated to cover $929 million of the $1.9 billion project.

Tchourumoff earlier this month made the recommendation to reject the bids and suggested looking for ways to cut project costs.