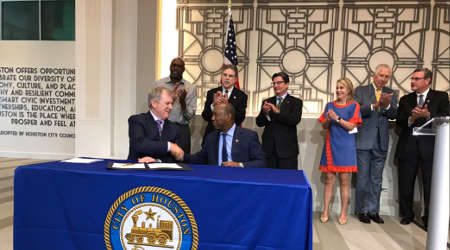 Texas Central Partners and Houston Mayor Sylvester Turner yesterday signed an agreement to work together on a jobs and economic development plan for the area around a future Houston rail station and the private company's bullet train.

Under the agreement, Texas Central will consult with the city on finalizing the passenger station area in Houston. The site is expected to be located in the general area south of U.S. 290, west of Loop 610 and north of Interstate 10, which is near major employment centers, city and Texas Central officials said in a press release.

Texas Central is developing a high-speed train between Houston and Dallas. The project, which has been estimated to cost more than $10 billion, will be privately financed. The train technology will be based on the N700 series of the Japanese Shinkansen bullet train.

The rail developer agreed to make sure the Houston terminal would be integrated with local transit networks, including "convenient, efficient and direct access for passengers to and from local transit systems," according to the memorandum of understanding (MOU) agreement.

Texas Central has said the project is expected to generate $36 billion in direct economic activity over the next 25 years, create more than 10,000 jobs during the construction and up to 1,000 jobs once the train is operational. Many of those jobs will involve construction within the city, including building the rail line and Houston station, according to the MOU.

The pact marks Houston's "most significant embrace" of the rail developer that would connect North Texas and Houston in 90 minutes, officials said.

Houston businessman Drayton McLane Jr., a member of Texas Central's board and the former owner of the Houston Astros, described the bullet train as a "game changer" for transportation options in Texas.

"This [project] demonstrates how the free market can play an integral part in addressing America's enormous infrastructure opportunities," said McLane.

Turner noted the bullet train would help address traffic congestion in a region that's among the fastest growing in the nation.

"Houston needs a paradigm shift — a comprehensive approach to mobility that includes all forms of transportation," said the mayor. "Certainly, a high-speed train to Dallas is a glowing idea among the options, especially when state transportation officials project traffic congestion on Interstate 45 between Houston and Dallas will double by 2035, increasing travel time from about four hours to more than 6.5 hours. Simply building more highways is not the answer."

Under the agreement, the city and Texas Central will collaborate on:
• providing environmental surveys, civil engineering and utility feasibility studies of certain city property and rights-of-way as part of the determination of the train's final route;
• coordinating with Harris County, Houston's METRO, the Gulf Coast Rail District and the Texas Department of Transportation to plan and design the Hempstead Corridor;
• participating in the study and design of efficient multimodal connections between the Houston station and the city's major activity centers;
• ensuring that supportive service facilities for the bullet train are within Houston's current or future city limits, subject to federal regulations and statutes; and
• developing a minority, women and small business enterprises program in line with the city's goals for professional services, development, construction, suppliers and other related services.

Earlier this week, Texas Central announced its selection of Fluor Enterprises and Lane Construction Corp. as the project's preferred designer and builder.