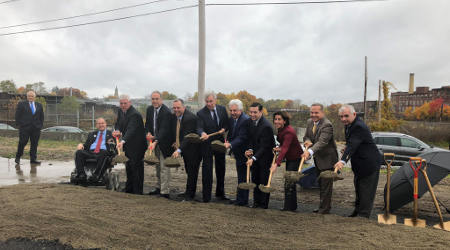 The new station will serve a "built-in ridership that lacks robust transit choices," as many locals need to drive to nearby commuter-rail stops in Attleboro and South Attleboro, Massachusetts, Rhode Island Department of Transportation (RIDOT) officials said in a press release.

The station is expected to attract about 250 daily boardings, RIDOT officials added.

The Pawtucket-Central Falls Station also is expected to serve as a catalyst for increased transit-oriented development.

Barletta Heavy Division Inc. will use a design-build process to construct the station.

The $47 million project was partially funded with a $13.1 million Transportation Investment Generating Economic Recovery grant and a $7 million grant from the Federal Transit Administration.

Other federal funds provided $18 million, while the state of Rhode Island allocated $5.9 million toward the project. Pawtucket and Central Falls provided $3 million.

Construction on the commuter-rail portion of the project is slated to reach substantial completion in late 2021. Service could begin by summer 2022 after testing and commissioning led by the MBTA.