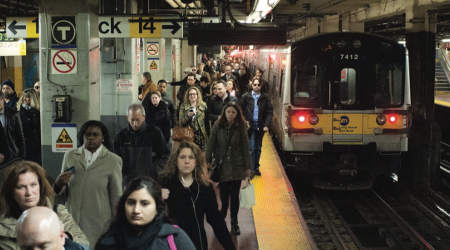 The $71.4 billion merger would be phased in over the next few decades. The first phase calls for establishing the "Crosstown Line" to provide through-running service from New Jersey to Long Island, New York. That proposal would build on Amtrak's Gateway plan to build new rail tunnels under the Hudson River and expand New York Penn Station.

As part of the first phase, new rail tunnels would be built under the East River to provide the New Jersey-Long Island connection.

The next phase would involve building new rail tunnels from Union City, New Jersey, to 57th Street in Midtown Manhattan to offer more trans-Hudson capacity. The final step would entail completing an uptown portion of the so-called "Manhattan Spine," a north-south trunk line that would run the length of Manhattan from the Bronx to Brooklyn.

"Many of New York City's peers, such as Paris and London, have transformed their traditional commuter-rail systems to run more like urban metro systems," RPA officials wrote. "With more frequent and convenient services to, in and through the city centers, those systems have increased businesses' access to a large and varied labor pool."

In Canada, Metrolinx is working on a similar plan to transform GO Transit's primarily peak-hour commuter-rail service to a high-frequency, all-day service.

The T-REX report is part of RPA's Fourth Regional Plan, which was unveiled in late 2017. That plan called for sweeping changes to subway and commuter-rail services in the New York City.