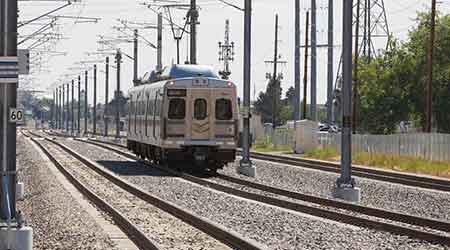 More than 1,200 train and bus tickets in the Denver area have been sold through the Uber Transit ticketing app since the option became available in May, Regional Transportation District of Denver (RTD) officials announced yesterday.

Uber Transit ticketing was launched to a small group of users in May and became available to all Uber users in Denver on June 25. Riders use the app to plan and book their transportation from home to work, appointments and the airport, RTD and Uber officials said in a press release.

While nearly two-thirds of tickets sold were for local rides, regional rides — including trips to and from Denver International Airport — were the second-most popular option for in-app ticket purchases, at 23 percent.

RTD, Uber and Masabi announced the app's availability in May. Uber Transit allows Denver-area riders to enter a destination in the app, select the "transit" option and purchase a ticket. When boarding a train or bus, riders then activate the ticket.

The app is intended to help riders navigate their "first-and-last-mile" transportation to and/or from a train station or bus stop.

Other data announced yesterday revealed that the number of repeat ticket purchases using Uber Transit has increased every week since ticketing launched. As of the week of June 24, about 25 percent of ticket sales were purchased by users who previously purchased tickets on the app.

"The data we're seeing from the launch of Uber Transit affirm that people appreciate choices, and that the future of mobility lies in providers working together to deliver on public expectations,” said RTD Chief Executive Officer and General Manager Dave Genova.

To learn more about transit agencies' mobile application offerings, read this article in the June issue of Progressive Railroading.