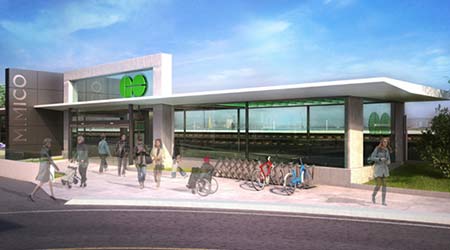 The province signed a letter of intent with Vandyk Group of Cos. to help develop the project. GO Transit’s owner Metrolinx and the Vandyk Group will negotiate the construction of the redeveloped station.

The PPP project will optimize the use of government-owned land and increase ridership by establishing new development along an existing transit line, province officials said in a press release.

In exchange for the right to develop land above Mimico Station, the Vandyk Group will pay all construction costs for the main station building, new parking and greenway. Allowing developers to access land above stations in exchange for constructing new station facilities helps create mixed-use communities at those locations, province and Metrolinx officials said.

“Bringing a new station into a community at little or no cost to the taxpayer is something that has great potential. It also makes good business sense,” said Metrolinx President and Chief Executive Officer Phil Verster. “Metrolinx continues to be open to innovative, joint approaches with the private sector that reduce the cost to taxpayers and also provide efficient, safe and affordable transportation options.”