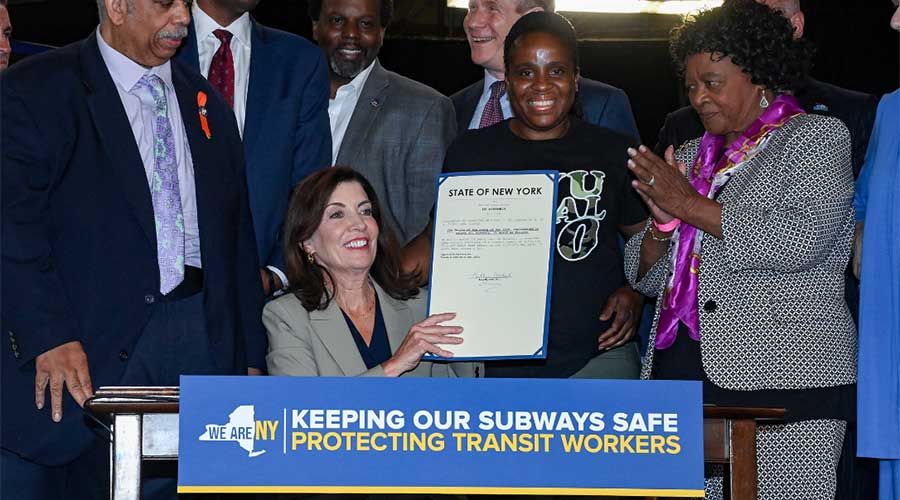 The bill (S.9468/ A.10491) will protect nearly 11,000 more workers against assault and harassment throughout the state, Metropolitan Transportation Authority officials said in a press release.

The legislation increases to second-degree assault the law that charges individuals who attack or harass transit workers. It also extends criminal charges to those who assault station workers, ticket and revenue collectors, maintenance workers, repairers, cleaners and supervisors not already protected by existing laws.

"During the pandemic, our transit workers were heroes, showing up while everyone was staying home — putting not only their health and the health of their families at risk, but also risking their lives as subway crime increased,"  Hochul said at a June 27 press conference. "New York's transit workers have always been there for us and now it is our job to be there for them. No one should be subjected to physical violence or harassment in the workplace, and today we are taking an important step in protecting the men and women who keep our subways and buses running."

The Amalgamated Transit Union, whose local chapter 1056 covers transit workers in New York City, has supported expanding protections for transit workers. In the past five years, a dramatic increase in the frequency and intensity of attacks on transit workers has caused many to become paranoid in the workplace, and some to not return to their jobs, ATU officials said in a statement on its website.