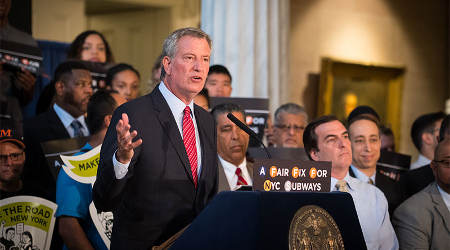 The proposal would increase the income tax rate from 3.867 percent to 4.41 percent on taxable incomes above $500,000 for individuals and above $1 million for couples.

The tax would be paid by about 32,000 New York City tax filers, or about 0.8 percent of the city's filers, according to a press release issued by de Blasio's office.

The new tax is expected to generate $700 million in 2018, rising to $820 million each year by 2022. New York City already provides $1.6 billion each year in operational support for subways and buses.

The mayor's new tax proposal also would enable New York City to cut fares in half for 800,000 low-income residents.

"Rather than sending the bill to working families and subway and bus riders already feeling the pressure of rising fares and bad service, we are asking the wealthiest in our city to chip in a little extra to help move or transit system into the 21st  century," de Blasio said. "This fair funding source will provide immediate help to straphangers — and it will help New Yorkers get around our city reliably for the next generation and beyond."

In recent months, MTA New York City Transit's (NYCT) subway system has been dogged by delays and operational issues, including an A-train derailment in June that injured dozens.