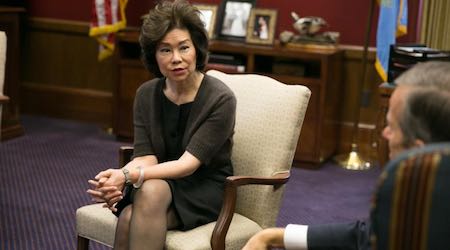 Four senators from New York and New Jersey are calling on U.S. Transportation Secretary Elaine Chao to visit aging rail and transit infrastructure in their states to see the "urgent need" for federal investment.

"Following in that tradition, a site visit, particularly one that allows you to witness the volume of passengers at peak travel times, will provide you detailed information about the status of the current infrastructure and the urgent need for federal investments in advancing the Gateway Project," the senators wrote.

The lawmakers also highlighted a recent incident involving a New Jersey Transit train that became disabled in the Hudson River rail tunnel on its way to Penn Station.

"While the cause of this most recent delay is not yet known, it is clear that the issue effectively blocked access into Penn Station in the same way that a failure in one of the two Hudson River tunnels would — causing massive delays and hardship for commuters," the senators said.

If work doesn't begin on the Gateway Project to replace the Amtrak Hudson River tunnel structure as well as other rail infrastructure along the Northeast Corridor, such incidents will become permanent problems, the senators warned.

Additionally, the lawmakers expressed concern about President Donald Trump's proposed funding cuts to programs needed for the Gateway Project. Those cuts would have a "disastrous impact" on the region's economy, they said.

Trump has proposed slashing the U.S. Department of Transportation budget by $2.4 billion, or 13 percent, as well as eliminating federal support for Amtrak's long-distance service.