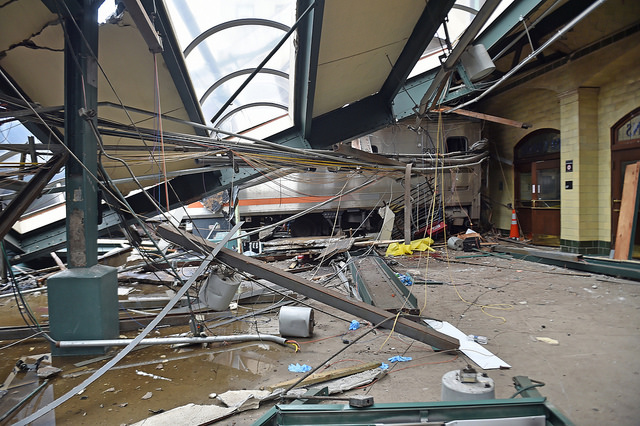 A New Jersey Transit train was traveling at a "high rate of speed" before it crashed into the rail station in Hoboken, N.J., yesterday morning, killing one person and injuring more than 100 others, according to Gov. Chris Christie.

The train, traveling from New York to Hoboken, approached the station around 8:45 a.m. and crashed through all barriers before stopping at the interior wall of the Hoboken Terminal. The roof partially collapsed into the station.

A woman standing on the platform died after being hit by falling debris, Christie said yesterday during a press conference. He put the number of injured at 108, but local news media reports said 114 people were hurt.

The train's engineer, a 29-year employee of NJ Transit, was injured and taken to a local hospital for treatment. He is cooperating with authorities, according to local news media reports.

Christie said the station's NJ Transit terminal would remain closed until engineers could determine the structural integrity of the building. The station's PATH terminal appeared to be fine, so PATH trains will be allowed to use that terminal, he said.

National Transportation Safety Board (NTSB) and Federal Railroad Administration officials arrived on the scene yesterday to begin their investigations.

The Hoboken Terminal was the site of a crash in 2011 when a PATH train hit a post at the end of the tracks. Thirty people were injured. Investigators determined in that case that the engineer failed to control the train's speed when it entered the station.

NTSB Vice Chair Bella Dinh-Zarr said yesterday that the NTSB investigation into yesterday's crash will examine whether the existence of a positive train control system would have made a difference in preventing the event.