Metra to begin reverse-commute service from Chicago to Lake County 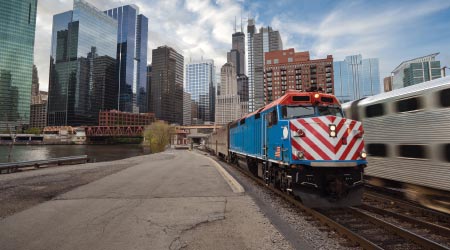 Metra will begin operation of a new reverse-commute service on the Milwaukee District North Line on March 4.

The two-year pilot project is a public-private partnership between Metra and Lake County businesses and governments that asked Metra in 2018 to begin a reverse-commute service. The businesses sought the service in order to recruit and retain employees living in Chicago, and reduce pollution and roadway congestion.

“We are excited to launch this test of new reverse-commute service between Chicago and Lake County,” said Metra Chief Executive Officer Jim Derwinski in a press release. “We are hopeful that this initiative will build our ridership, help local businesses to recruit top talent and have a positive impact on economic activity in Lake County. This partnership also is an innovative way to test the demand for service to Lake County and potentially improve our infrastructure.”

For a full downloadable schedule of this line, visit the Metra website here.

If the pilot project shows that the reverse-commute service is self-sustaining, the partners will fund the construction of new universal crossovers near the Lake Forest Station, Metra officials said. Constructing crossovers at Lake Forest would allow Metra to turn trains around at that location, which would create an opportunity for better service in the morning and evening rush periods if demand supported it.