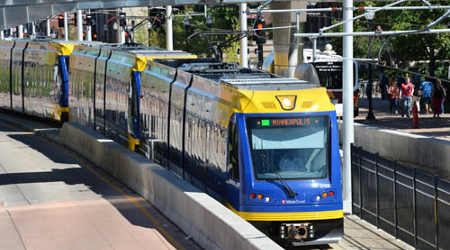 Under the agreement, Lunda/McCrossan will build 14.5 miles of double track and 16 light-rail stations and structures. The companies also will construct 29 new bridges along the route, six pedestrian tunnels, two cut-and-cover light-rail tunnels and more than 100 retaining walls.

McCrossan was one of the prime contractors that worked on the Minneapolis portion of the Green Line, which included rehabilitating the Washington Avenue Bridge over the Mississippi River to accommodate light-rail track. The company also worked on Metro Transit's Blue Line.

The council was able to award the civil construction contract after receiving a letter of no prejudice from the Federal Transit Administration (FTA) earlier this week. The letter makes early construction work on the project eligible for federal reimbursement upon award of a Full Funding Grant Agreement, which is expected in spring 2019, Met Council officials said.

The federal government would pay $929 million toward the project, with local funding covering the remaining costs.

Next month, the council expects to issue a limited notice to proceed, which will allow the contractor to start construction in designated areas. That will help keep the project on schedule while the council prepares its grant application to the FTA, Met Council officials said.

Activities this winter could include staffing and equipment mobilization, site clearance, demolition and utility work. Heavy construction is expected to start in 2019 and wrap up in 2022. Light-rail vehicle testing would follow in 2022 or 2023.