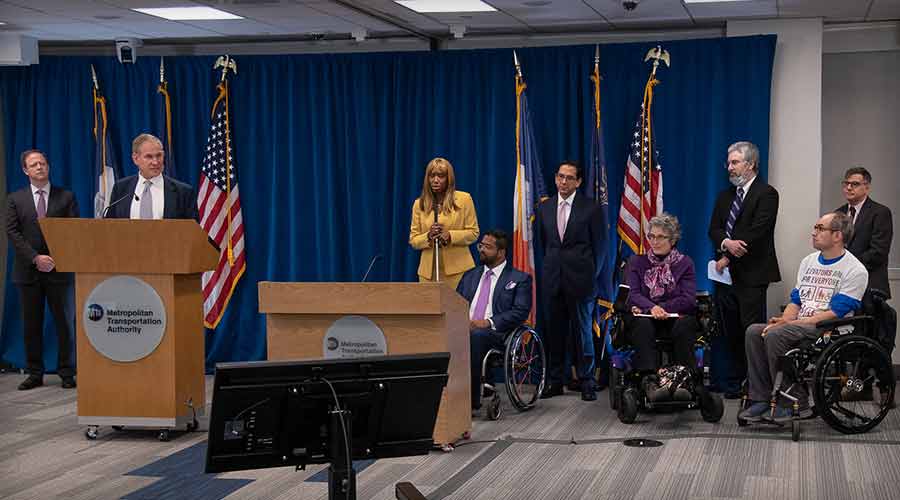 The Metropolitan Transportation Authority this week announced it has settled two class-action lawsuits brought against the New York City transit system for its subway stations that are inaccessible to people with disabilities.

"This settlement is not just the unveiling of a game plan, but the start of a closer collaboration between the MTA and advocates to achieve our shared goal, to ensure that everyone has the ability to ride mass transit without needing to plan around accessible stations," said Quemel Arroyo, MTA's chief accessibility officer and senior adviser.

Funds for a $5.2 billion accessibility upgrades program are included in the 2020-24 MTA Capital Program.

MTA has 472 subway stations, plus 21 SIR stations. Only 131 subway and SIR stations — or 27% — are fully accessible via elevators and ramps. Nine stations that are only partially accessible are also slated for upgrades. There are more than 1 million people with disabilities living in the city.

MTA leadership has been criticized for being slow to address accessibility concerns, reported The New York Times. Several transit systems in the nation's largest cities are either completely accessible or are more accessible than the MTA system, including in San Francisco, Washington, D.C., Boston, Philadelphia and Chicago.

Many subway lines have gaps of 10 or more stops between elevator access. The lack of access to one of the nation's largest transit systems has effectively blocked off some areas of the city from being fully accessible, the Times reported.

A group of advocacy organizations, including Disabled in Action, issued a lawsuit in 2017 claiming MTA's lack of accessibility was a violation of the city's human rights laws. And in 2019, another lawsuit on the federal level claimed the MTA was violating the Americans with Disabilities Act when the agency renovated stations without installing elevators or ramps. Later that year, MTA officials approved the $5.2 billion capital plan to add elevators to 70 stations by 2024.

The remaining 5% of stations that are not included in accessibility upgrades have difficult engineering issues, making the addition of elevators or ramps unfeasible.