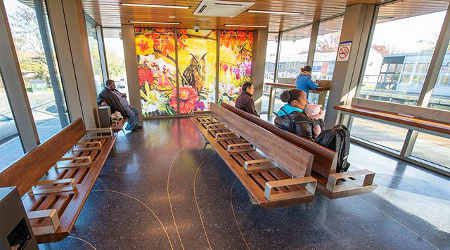 At the Brentwood and Deer Park stations, LIRR built new bathrooms that are compliant with the Americans with Disabilities Act (ADA). Crews also installed new benches and terrazzo flooring, and added LED lighting. Additional upgrades include ADA-compliant ramps, which are expected to be completed by Dec. 31, LIRR officials said in a press release.

At the Northport Station, LIRR renovated an existing ADA-compliant bathroom and added a second; renovated the station interior and exterior; and added wayfinding signage, Wi-Fi and LCD display screens.

The three stations' renovations are part of more than 100 projects aimed at transforming LIRR, including the third-track expansion project, a recently completed double-track project and redevelopment of the Moynihan Train Hall in New York City.

"The LIRR is working hard to deliver better and more reliable service, but — as demonstrated by these station improvements — we're also paying attention to every aspect of the customer experience," said MTA Chief Development Officer Janno Lieber. "These upgrades were built and put in service in less than a year, which illustrates how the MTA is delivering projects  faster and at a lower cost than in the past."