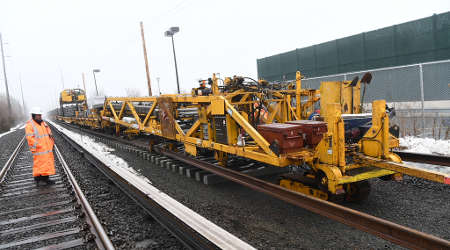 The $431 million project calls for building 13 miles of second track between Farmingdale and Ronkonkoma, New York.

This week, the railroad will continue signal testing around the clock along the project corridor, LIRR officials said in a press release.

Over the past 25 years, ridership on the Ronkonkoma Branch has doubled to nearly 48,000 passengers each weekday. With only one track on the 18 mile-stretch between Ronkonkoma and Farmingdale, there is a "significant risk" to service and on-time performance in the event of service disruptions, LIRR officials said on the project's website.

LIRR crews are using new technology that lays rail 10 times faster than before, which allows them to complete the project more quickly.

The project initially was expected to cost $388 million, but the new estimate now includes upgrades to power and signal systems and snow melt systems, as well as efforts to complete the project a year ahead of schedule, LIRR spokeswoman Sarah Armaghan said in an email.

The railroad laid the final 5 miles of rail for the project in January.