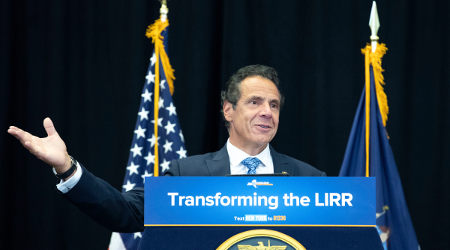 The effort includes 50 projects aimed at modernizing 9.8 miles of track along the congested Main Line between Floral Park and Hicksville, New York.

The program calls for adding a third track, eliminating all seven street-level grade crossings in the corridor, adding new power substations and parking, and modernizing track and signal infrastructure.

The work is expected to provide smoother and more reliable commutes, safer and quieter crossings, and cleaner air along the project corridor, according to a press release issued by Cuomo's office. The expansion will enable LIRR to increase service and run "reverse-peak" trains for riders traveling to jobs on Long Island during traditional business hours.

Crews will replace all tracks and build the new third track using advanced dampening technology. The project also includes the installation of sound-reducing walls along nearly 6 miles of residential neighborhoods along the line.

Cuomo has said that the project won't require any residential property acquisitions.

"Since the 1940s, people talked about adding a third track and modernizing the Main Line corridor, and now we're actually doing it," Cuomo said. "The LIRR is the backbone of the region's economy and this expansion effort will boost growth for generations."

The third-track project is slated to be "substantially completed" by 2022's end.

In late 2017, the Metropolitan Transportation Authority's board awarded a $1.8 billion design-build contract to the 3rd Track Constructors joint venture for the project.

LIRR released the draft environmental impact statement for the project in fall 2016.