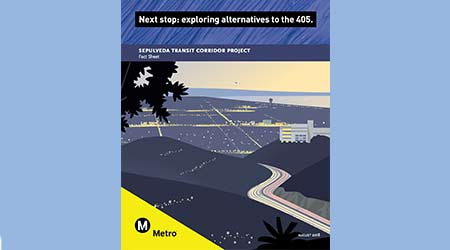 The project calls for building a high-capacity transit line between the San Fernando Valley and Westside through the Sepulveda Pass. Metro is seeking to build a portion of the line in time for the 2028 Olympics and Paralympics, which will be held in Los Angeles.

Three of the four proposed concepts are heavy rail — which is used on Metro's Red/Purple Line subway — and the other is a monorail.

The chosen concepts are part of an ongoing feasibility study for the project, which has garnered nearly $10 billion in funding from Metro's Measure R and M sales tax measures that were approved by LA County voters in 2008 and 2016, respectively, authority officials said in an announcement.

Metro also received Measure R and M funds to build a 9.2-mile light-rail line between the Orange Line's Van Nuys Station and Metrolink's Sylmar/San Fernando Station. Known as the East San Fernando Valley Transit Corridor, the line already has been approved by the Metro's board and is slated for a 2022 construction start and 2028 opening.

"A planning challenge for the Sepulveda project has been figuring out whether it's best to extend the Van Nuys light-rail line to the Westside to allow a one-seat ride, or use a different type of train and build a good, easy transfer between the two lines," Metro officials said.

The authority's staff determined light rail doesn't offer as much future capacity for the Sepulveda line as heavy rail or monorail, since light rail has shorter trains and smaller cars.

Modeling conducted by Metro shows that the Sepulveda project would also greatly increase ridership on the Van Nuys-to-Sylmar/San Fernando light-rail line because it provides a reliable way for passengers to reach the Sepulveda line.

The monorail concept wouldn't need as much expensive tunneling as the heavy-rail concepts, but would be slower and have lower ridership than heavy rail, Metro officials said.