The Los Angeles County Metropolitan Transportation Authority (Metro) will open all six new stations along its Gold Line light-rail extension on March 5 as planned, denying a request to postpone the opening of a station in Azusa, Calif.

The city, along with Azusa Pacific University (APU) and Rosedale Land Partners, had asked Metro to delay the opening of the APU/Citrus College Station because an extension of Citrus Avenue to the station and its parking garage had not yet been completed, leading to concerns about increased traffic on residential streets, Metro officials said on the agency's blog.

Metro will hire a traffic engineering firm to determine if there are other enhancements that can be made until the Citrus Avenue extension is finished, wrote Metro Chairman Mark Ridley-Thomas in a response to the request. 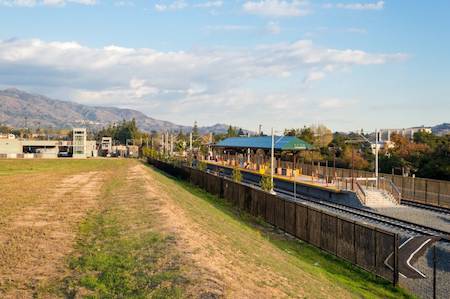 Additionally, the Foothill Gold Line Construction Authority — the agency charged with building the project — will run a shuttle bus connecting the college and university with the new station during school hours, Ridley-Thomas wrote.

"Metro believes it is our duty as responsible stewards of the public trust to open the Gold Line extension with all stations, as expected, on March 5, 2016," he wrote.

Ridley-Thomas also requested Metro Chief Executive Officer Phillip Washington and his staff to schedule a meeting with the city of Azusa to "discuss the path forward in more detail."

In an earlier letter to Ridley-Thomas, Azusa Mayor Joseph Rocha said that opening the station as scheduled could pose safety concerns and asked that Metro to postpone until July.

If the station opens in March, passengers would be unable to gain access to the station and parking structure without traversing residential streets that aren't build to safely handle additional vehicle trips, Rocha wrote in the letter.

Additionally, the increased vehicle and pedestrian traffic on these streets would impose a number of adverse impacts upon residents of the Rosedale master-planned community, Rocha said.