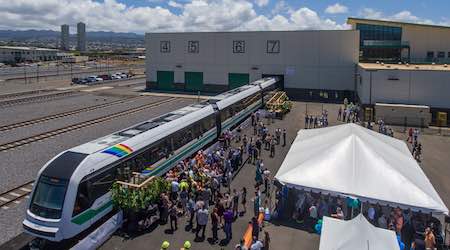 The Honolulu Authority for Rapid Transportation (HART) yesterday held the first public viewing of one of its new trains.

Visitors toured the driverless train, which is the first of its kind in the United States, HART officials said in a press release. Locals also took brief entry tours of the agency's rail operations center in Pearl City, Hawaii.

HART staff and volunteers were on hand to answer questions about the agency's plan to build a 20-mile passenger-rail system in Honolulu. Construction on the system is underway, with the first phase slated to open in late 2020. The entire system will open in 2025, according to HART's website.