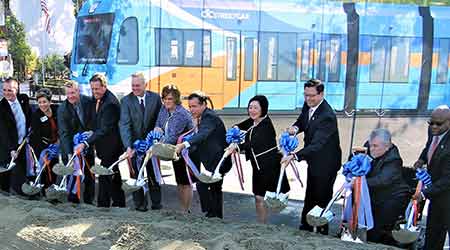 Projected to begin serving passengers in late 2021, the OC Streetcar will run along a 4.1-mile route from the Santa Ana transportation center to a new station in Garden Grove, California. The system will feature 10 stations and will serve more than 7,000 riders each day. OCTA broke ground for the project Nov. 30.

The agreement is the third FFGA signed under the current administration. The FTA has advanced CIG program for 17 new projects since January 2017 totaling about $4.8 billion in funding commitments. So far, the FTA has allocated $1.86 billion of the $2.62 billion in FY2018 CIG funds appropriated by Congress.

To learn about the OC Streetcar and other new U.S. streetcar systems, read this feature in Progressive Railroading's September issue.