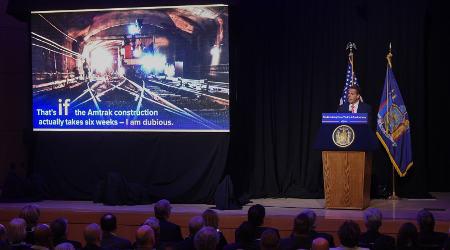 The governor's proposal included the creation of a task force to address "short- and long-term challenges" at Penn Station, which has been the site of two recent derailments because of track disrepair.

Amtrak, the station's operator, recently announced an accelerated time frame to repair track and other infrastructure. The repairs will be performed over the summer, as opposed to an earlier program that called for the work to be completed over two years.

Amtrak's Penn Station work will reduce the number of trains using the station by about 20 percent during peak travel times, a situation that will create a "near-term crisis" for daily commuters, according to Cuomo. More than 600,000 people travel through the station daily.

The actions Cuomo announced yesterday will:
• develop an immediate plan for the Penn Station summer "crisis";
• recommend a viable long-term management solution for Penn Station and turn it into a "21st century transit hub" with the Farley Train Hall and the Gateway Tunnel; and
• challenge the Metropolitan Transportation Authority to modernize the New York City's subway system and increase the number of trains during peak periods to relieve crowding and reduce delays.

Amtrak's service cuts at Penn Station will exacerbate the overcrowded conditions of New York City's subways, a situation that requires a broader approach to addressing the city's transportation issues, Cuomo said. As a result, he is establishing a task force of transportation experts and stakeholders to develop short-term transit solutions, as well as long-term systemic changes.

Additionally, Cuomo announced the "MTA Genius Transit Challenge," a competition to come up with solutions to the subway system's problems.

"The intolerable state of disrepair in Penn Station and its ripple effect of delays and dysfunction throughout the subway system have reached a breaking point, and we must enact this comprehensive action plan now to find both short and long-term solutions to these growing challenges," Cuomo said in a prepared statement.

The MTA Genius Transit Challenge will solicit innovative solutions designed to increase capacity and improve reliability of the subway service.

Competitors will receive "comprehensive briefings" on the transit system and be challenged to find solutions. A panel of technology and transportation experts will judge the competition, and the state will provide a $1 million "genius" award for the best ideas, according to a press release.