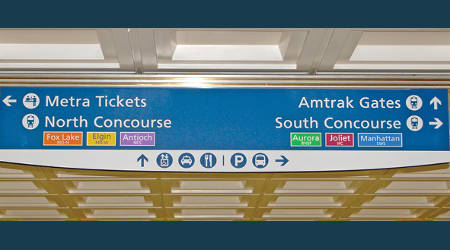 The 81 updated signs are designed to easily connect travelers to transportation options and amenities in the station, RTA officials said in a press release.

In particular, the signs provide Amtrak customers with information about connecting to Chicago Transit Authority (CTA) and Metra routes.

The signs also correct outdated or incorrect signage and unify all signs to Amtrak's current standards.

"One of the RTA's key goals is the promote transit ridership and make it easier for people to use and understand our system," said Leanne Redden, RTA's executive director. "Union Station is huge and can be confusing to those who didn't use it regularly."

In 2012, the RTA worked with CTA, Metra and Pace suburban bus system to create interagency signage standards. RTA then applied these principles to improve signage around Union Station.