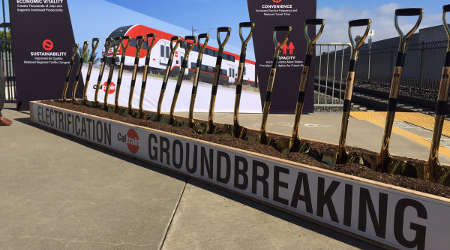 As part of the project, the commuter railroad will electrify its corridor between San Francisco and San Jose, California. Caltrain also will acquire new high-performance electric trains to deliver faster, more frequent service.

The groundbreaking event followed months of uncertainty over federal funding for the project. In late May, the Federal Transit Administration announced that it approved a $647 million Full Funding Grant Agreement for the project, marking a reversal from the agency's earlier decision to halt the grant.

"The Caltrain electrification project has been a long time coming. So many leaders throughout the Bay Area fought hard to make this project a reality, and I'm thankful to [Transportation] Secretary Elaine Chao for signing the grant agreement," said U.S. Sen. Dianne Feinstein (D-Calif.) in a press release. "This project will allow Caltrain to serve more than 100,000 riders a day by 2040, and take thousands of cars off the roads at rush hour."

Expected to cost $1.98 billion, the electrification project is slated to be completed in 2021. The work is being funded through a combination of federal, state, regional and local funds.