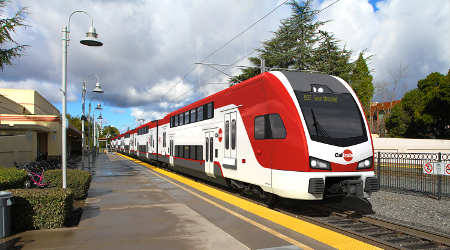 The program was created by Senate Bill 1, the landmark statewide transportation legislation signed last year. Caltrain expects to receive close to another $4 million from the program next year, railroad officials said in a press release.

Of the $2.5 million awarded, $500,000 will go to fund Caltrain's bike parking management plan; $1 million will be used to maintain and rehabilitate the system's rail cars; and $1 million will add new crossover tracks near the middle of the corridor to enhance operational and schedule flexibility, they said.

The grant program is one of several that railroad officials expect to result in additional investment in Caltrain's system. Caltrain officials also have applied for $630 million from the Transit and Intercity Rail Capital Program (TIRCP) to maximize the potential of the Caltrain electrification project to expand capacity on overcrowded trains.

If the TIRCP grant request is successful, the investment will maximize the electrification project's benefits by speeding up the fleet's full conversion to electric trains and making Wi-Fi available to riders.

If Caltrain's full grant request is received, the investment would cover the cost of fully converting the system's fleet to eight-car electric trains, an improvement that would increase the railroad's seating capacity by at least 21 percent, depending on train configurations, Caltrain officials said.