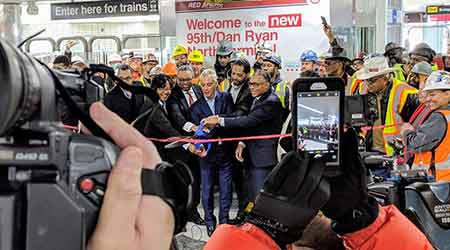 The project signifies the completion of a $280 million project that provides the city's south side a state-of-the-art transit facility, CTA officials said in a press release.

The new north terminal is the second of two bus and rail facilities that replace the original 50-year-old terminal. A new pedestrian bridge that spans 95th Street now connects the two terminals to provide riders a safe pathway when connecting between bus and rail services, CTA officials said. One of authority’s busiest facilities, the new station offers 24-hour Red Line service for more than 20,000 commuters daily.

The station is a critical component of the Red Line, connecting far south side communities to job centers throughout the region, and serving as a transit gateway for the south side and suburbs, authority officials said.