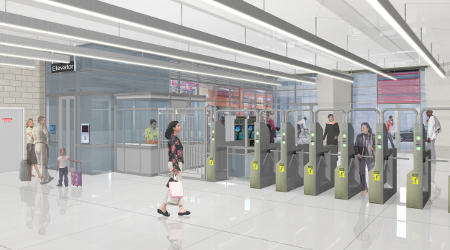 The three shortlisted teams are Walsh Fluor Design-Build Team, Chicago Rail Constructors and Kiewit Infrastructure Co. The CTA in June issued a request for qualifications for teams to work on the project.

With the pool of candidates finalized, CTA will issue a draft request for proposals to invite the bidders to submit proposals for how they would design and build the project's first phase. The agency will evaluate the proposals on experience, price and other factors.

The program's first phase involves rebuilding four of the oldest Red Line stations and making them fully accessible to people with disabilities. The chosen team also will reconstruct 1.3 miles of adjacent track infrastructure and build a rail bypass to unclog a century-old junction where the Red, Purple and Brown lines meet.

The bypass will enable the CTA to increase the number of trains on the Red Line to reduce overcrowding, agency officials said.

"We're pleased to make good progress on getting closer to building this project and fulfilling our promise to improve rail service on the Red Line, our busiest line," said CTA President Dorval Carter Jr. "It is critical that we find the most qualified builders in the industry to construct this project, which is one of the biggest modernization projects in CTA history."

In January, the CTA secured $1 billion from the Federal Transit Administration to help pay for the $2.1 billion first phase of the modernization project.