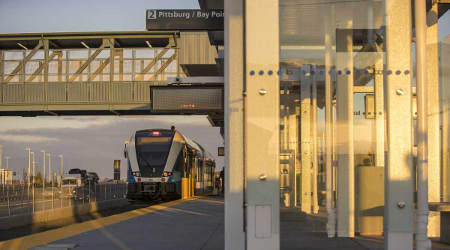 The milestone came five months after the debut of the new service in East Contra Costa County, California.

In June, average ridership along the 10-mile Antioch extension was 7,895. That figure jumped to 8,622 in October, BART officials said in a press release.

"From the very first week of service, BART to Antioch has exceeded ridership expectations," said Joel Keller, a director on BART's board.

The extension's popularity is driving demand for parking at the Antioch Station. As a result, BART is pursuing a $16.4 million project to nearly double the number of spaces available.

The extension, which includes two new stations, runs along the Highway 4 median between the Pittsburg/Bay Point Station and Antioch. The line features diesel multiple units that operate on standard gauge track instead of BART's wider gauge rails.