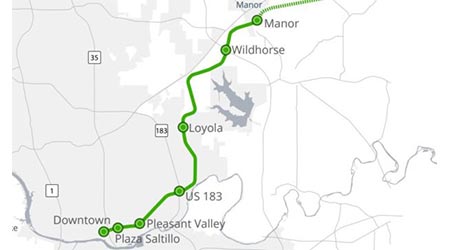 To be funded by a $600,000 grant received from the Federal Transit Administration in December 2018, the study will examine the potential for transit-oriented development along the route. The Green Line has been identified as a potential corridor to be developed under Project Connect, a long-term vision for a regional public transportation system, Cap Metro officials said in a press release.

The Green Line would be established on 15 miles of Cap Metro-owned track, running from Downtown Station in Austin to the Colony Park area of eastern Travis County to Manor.

"Capital Metro already serves Manor well with MetroExpress service, but those buses are often stuck in traffic," said Manor Mayor Rita Jonse, a Cap Metro board member. "We need to explore our options for faster, more reliable options for public transportation throughout the region, especially as its population is expected to reach 4 million by 2040."

Cap Metro has worked for more than two years with the city of Austin, Travis County and other regional partners to develop Project Connect and its component services, such as the Green Line.

The regional approach will enable central Texans to benefit from multimodal transit options instead of being so reliant on cars, the partners believe.