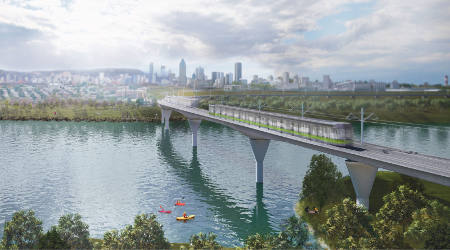 An Alstom-led consortium with SNC-Lavalin has obtained a CA$2.8 billion contract to deliver a complete automatic and driverless light-rail system for the Reseau Express Metropolitan (REM) project in Montreal.

The consortium's contract with CDPQ Infra includes rolling stock and signaling, as well as operation and maintenance services. Alstom's share of the contract is CA$2.2 billion and SNC-Lavalin's share is CA$600 million, according to an Alstom press release.

Upon completion, REM will be one of the world's largest automated networks. At more than 40 miles long and with 26 stations, the network will connect downtown Montreal to the South Shore, the North Shore, the West Island and Pierre Elliott Trudeau International Airport.

In addition, the consortium is responsible for train and system integration tests and depot equipment supply for train maintenance.

Commercial service on the route's first segment is expected in summer 2021.

Meanwhile, a groundbreaking ceremony for the REM project was held yesterday in Montreal. The project, which will cost a total CA$6.3 billion, is the Montreal area's largest public transportation project in 50 years.