The association bestowed the awards at its 2016 annual meeting in Los Angeles. 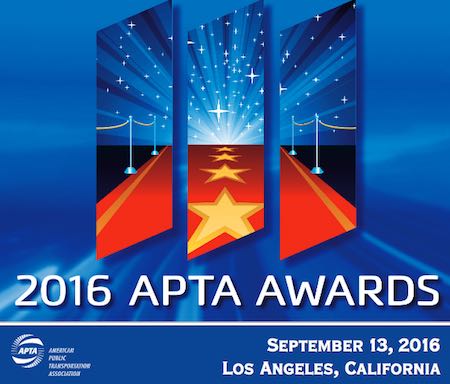 Among the winners was Minneapolis-area Metro Transit, which was named Transit System of the Year, as the agency announced last month. In addition, the Chicago Transit Authority won APTA's Innovation Award for the development of its Ventra app.

U.S. Reps. Peter DeFazio (D-Ore.), Daniel Lipinski (D-Ill.) and Bill Shuster (R-Pa.) received APTA's 2016 National Distinguished Award, which is given to individuals who have made "significant contributions at the national level to public transportation through policy, legislative initiative and leadership."

Joni Earl, who previously served as chief executive officer of Sound Transit, won the Special Award for Extraordinary Leadership. During her tenure, she helped transform the agency from a "shaky start-up to a nationally recognized leader in public transit," APTA officials said in a press release.

The Outstanding Public Transportation Board Member Award went to Thomas Nolan, chairman of the San Francisco Municipal Transportation Agency. Shirley Harris, who serves on the board of the San Mateo County Transit District, also received that award.

"The 2016 APTA award winners are dedicated and skilled individuals and public transit organizations that have advanced the cause of public transportation for millions of people," said APTA Chair and Executive Director of Foothill Transit Dorin Barnes. "They are stellar role models who have made significant contributions to public transit and the communities they serve."

APTA also inducted the following individuals into its Hall of Fame: