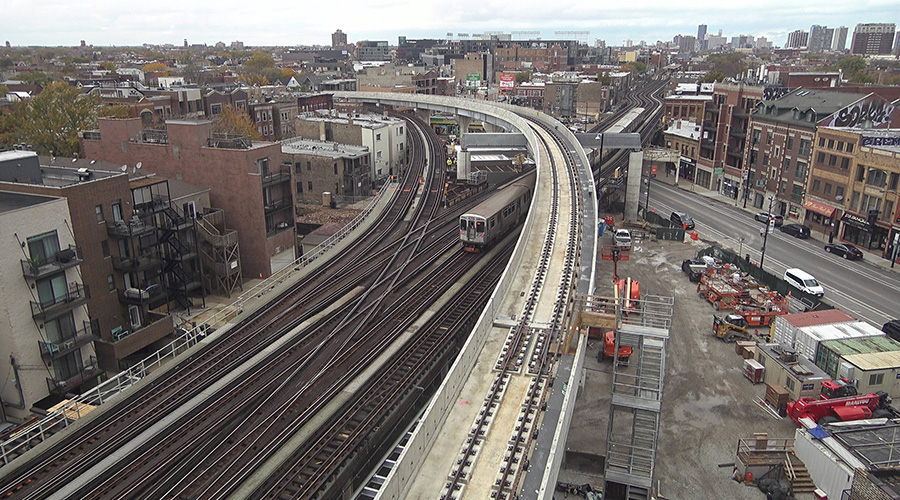 The Chicago Transit Authority (CTA) announced last week the completion of the Red-Purple Bypass, which went into service Nov. 19 on the Brown Line.

The project is part of the $2.1 billion Red and Purple Modernization (RPM) Phase One Project and adds the agency’s first new section of track in nearly 30 years, CTA officials said in a press release. RPM is the largest reconstruction project in CTA history as the agency works to replace 100-year-old rail and structures to improve rail service. The bypass is replacing 114-year-old Clark Junction that became a “chokepoint” for service.

The bypass allows CTA to add trains during peak hours and eliminate capacity restrictions caused by antiquated rail infrastructure. Service will also speed up because trains will no longer have to wait for each other to cross the junction. The project also includes noise-reducing walls at the street level and improved aesthetics to benefit the community.

CTA will next demolish, rebuild and realign the 100-year-old Red and Purple Line tracks between Belmont Station and West Cornelia Avenue, making service faster and more reliable by eliminating a slowing curve in the tracks and allowing more trains to run during peak hours. Work on that project will begin in early 2022 and continue through 2024, officials said. The RPM program also includes rebuilding all Red and Purple Line track structures and stations between Belmontl, Linden and Wilmette.

“We are continuing to work hard on modernizing the Red Line through remaining RPM work now in progress, as well as continuing to pursuing funding for the new Red Line Extension Project,” said CTA President Dorval Carter.