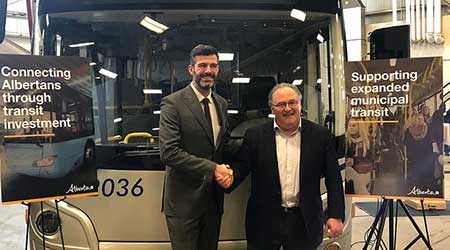 The Alberta Community Transit Fund will award a total of CA$215 million to communities for the purchase of light-rail vehicles, electric buses and a dedicated bus lane, the Alberta government announced late last week.

Calgary will use the funds to purchase 15 new light-rail vehicles and 52 compressed natural gas buses. In Edmonton, the dollars will go toward two light-rail stations, a dedicated bus lane on Terwillegar Drive and 28 new electric buses.

In the first three years, the grants will be funded with CA$141.4 million from the Climate Leadership Plan.

"These transit projects will help Albertans get to where they need to go in a timely and cost efficiently way while helping to reduce pollution and ease congestion," said Brian Mason, Alberta's transportation minister.