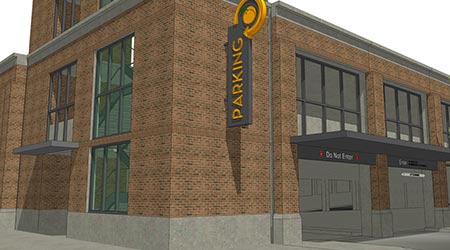 The Orange County Transportation Authority (OCTA) and city of Orange, California, today are marking the opening of a new parking structure near Metrolink's Orange Station.

Located on North Lemon Street in Orange, the $29.5 million structure is a part of an ongoing effort to accommodate the growing number of Metrolink riders and visitors to the Old Towne Orange area. The structure's brick façade is designed to reflect the area's character.

The facility includes 608 parking spaces, 500 of which are dedicated to transit riders to help expand access to the Metrolink station and accommodate commuters who use nearby train and bus services, OCTA officials said in an announcement. The remaining 108 spaces are available to the public.

The structure also includes six electric car charging ports, solar panels and 24 bicycle lockers for commuters who ride their bikes to and from the station.

The project's cost was covered by state Measure M funds, and federal and city contributions.