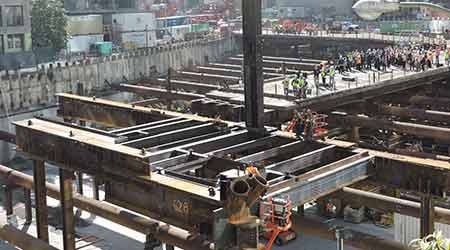 Steel plates are being fabricated and will be delivered to the transit center in March for installation. Repairs are scheduled to be completed by the first week of June, but a reopening date hasn't yet been determined, TJPA officials said in a press release.

An independent peer review panel is overseeing the authority's review of thousands of shop drawings, inspection reports and design documents to determine if other inspections will be necessary before reopening the facility, they said.

The Salesforce Transit Center — which opened in August 2018 — temporarily closed in September 2018 after fissures were discovered in two steel beams on the ceiling of the third-level bus deck. Two shoring systems were installed, and additional inspections and continued monitoring have revealed no additional issues, TJPA officials said.

Although the authority is eager to reopen the transit center, it's balancing that goal with its responsibility to undertake "an appropriately rigorous inspection and review protocol," as well as to cooperate with the independent review, said TJPA Executive Director Mark Zabaneh.

The transit center replaced the former downtown Transbay Terminal. The 1 million-square-foot facility is used by Bay Area Rapid Transit, Caltrain and Amtrak passengers, and will become a stop for California's future high-speed rail line between San Francisco and Los Angeles.