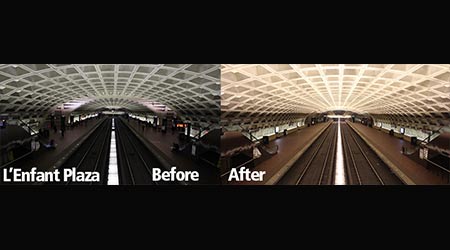 The authority plans to install the LED systems — which on average are six times brighter that current trackbed lighting — at all of Metro's 48 underground stations over the next 30 months. The work is part of a multiyear, $50 million capital investment in more energy efficient LED lighting.

The new lighting infrastructure improves visibility and enhances safety and security, cuts energy usage in half and reduces ongoing maintenance requirements, WMATA officials said in a press release. Each station measures three to nine times brighter after the lights are installed, they said.

Work is half completed at three additional stations and 11 more are slated for the lighting upgrade in 2019's first half.

"Because the installation of new light fixtures along the tracks can only take place when trains are not running, [this] project is one of several that has benefited from the expanded overnight and weekend maintenance time that was approved by [our] board last year," WMATA officials said.