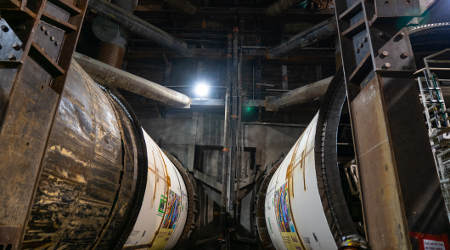 The agency has launched two tunnel boring machines that will dig the twin tunnels, Metro officials said in a blog post yesterday.

The machines will dig east from the future Wilshire/La Brea station to the current terminus of the Purple Line at Wilshire and Western Avenue. When they arrive there, they'll be taken apart, trucked back to Wilshire and La Brea and then reassembled to start excavating to the west.

The tunneling work is starting after "several decades of talk and plans that never came to fruition," LA Metro blog writer Steve Hymon noted. The project had stalled due to local political reasons and lack of funding or regionwide support, but that changed after LA County's Measure R sales tax passed in 2008 and Measure M in 2016. Both measures will produce revenue to fund major transportation projects in the LA region.

Proceeds from the latter measure will help accelerate the project's third section between LA's Century City and stations at Wilshire and Westwood Boulevard and the Westwood/VA Hospital.

The 9-mile Purple Line extension is being built in three sections, and will extend the subway from its current terminus to the Westwood/VA Hospital. The first two sections are under construction.

In February, Metro held a ceremony to mark the start of other major construction activities for the Purple Line's second phase.

The total cost of the entire Purple Line extension is estimated at $8.2 billion, according to Metro's website.