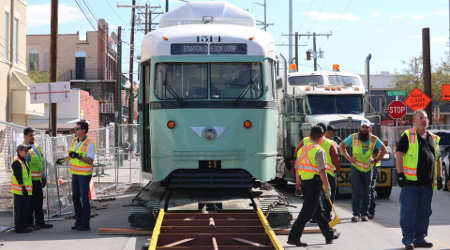 During this period, the streetcar will run its downtown and uptown loops without a safety escort, according to a press release issued by the Sun Metro Mass Transit Department.

Streetcar staff will operate the system's proposed schedule with no passengers on board as they evaluate "everything from streetcar speeds to roundtrip times," Sun Metro officials said.

The Camino Real Regional Mobility Authority (CRRMA) is responsible for building the 4.8-mile project, including remanufacturing six Presidents' Conference Committee (PCC) streetcar vehicles that ran in the area until 1974. Sun Metro will operate and maintain the streetcars and associated facilities when the project is finished.

CRRMA also is constructing track, overhead contact system lines, power stations and a maintenance and storage facility, according to the agency's website. Brookville Equipment Corp. is restoring six PCC streetcars for the system. The $97 million project is slated to be completed late this year.