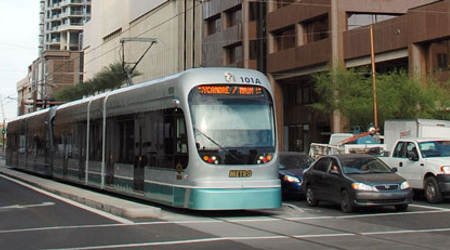 The city approved the 5.5-mile project in spite of resistance from a grassroots group known as "4 Lanes or No Train," which formed earlier this year to stop the project, The Arizona Republic reported.

The group was concerned that the project would cause traffic bottlenecks and harm local businesses, the paper reported.

In a prepared statement, Phoenix Mayor Thelda Williams said the South Central project would connect neighborhoods to opportunity and spur economic development in the area.

To receive the federal funds, the project must remain on its existing timeline, which includes starting the engineering phase by November, the Phoenix New Times reported. The city was considering a four-lane configuration for the project, but that likely would have required a new environmental assessment that would delay the project.

Valley Metro Chief Executive Officer Scott Smith told council members that any delays could remove the project from the federal grant queue, according to the newspaper.

And if Valley Metro were to reapply for an FTA grant, the project could be delayed by two to three years, Build South Central Coalition officials said. Reapplying for the grant also could add $35 million to $50 million in design and pre-construction fees, they added.