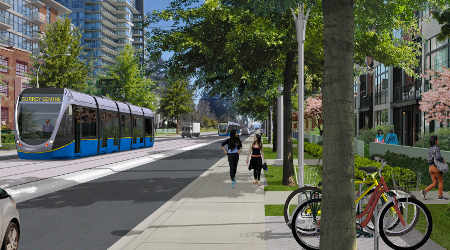 TransLink has issued a request for qualifications (RFQ) to build its CA$1.65 billion Surrey-Newton-Guildford light-rail project.

The 6.5-mile line will feature 11 stops. The project is part of TransLink's 10-year plan to improve transit options in metro Vancouver, British Columbia.

Three-quarters of transit trips in the area start and end in Surrey, according to a TransLink press release.

"This shows people living there want to be able to work and play close to home," said Stephan Mehr, the project's director. "[Light rail] will make that type of lifestyle easier to attain in Surrey, while preparing the city for decades of growth."

By 2041, more than 400,000 people are expected to move to communities south of the Fraser River, including Surrey, Mehr added.

After the RFQ period closes, TransLink will invite up to three proponents to submit detailed technical and price proposals. The agency expects to award the contract in late 2019 and open the new line in 2024.

The government of Canada is providing CA$483.8 million,  while TransLink and regional revenue will cover another CA$1.12 billion.

British Columbia is directing most of its share of funding to the Broadway subway project.