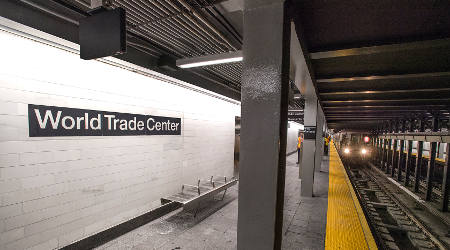 Situated along the 1 subway line, the WTC Cortlandt Station was built within the footprint of the original Cortland Street stop, which was located beneath the original World Trade Center.

The station shell, tracks and tunnels were destroyed when the WTC towers fell, cutting service from the 1 Line's southern terminus at South Ferry until a year after the attacks, NYCT officials said in a press release.

The station provides a "critical accessible transfer point" given its proximity to the fully accessible World Trade Center Transportation Hub, which connects to 11 subway lines and the Port Authority Trans-Hudson service.

Construction began on the project in 2015, when the Metropolitan Transportation Authority (MTA) was given control of the site, which is located within the greater World Trade Center overseen by the Port Authority of New York and New Jersey (PANYNJ).

A partnership of several agencies — including the MTA and PANYNJ — worked on the station's design.

"The opening of WTC Cortlandt returns a subway station to a vibrant neighborhood and represents a major milestone in the recovery and growth of downtown Manhattan," said MTA Chairman Joseph Lhota. "WTC Cortlandt is more than a new subway station. It is symbolic of New Yorkers' resolve in restoring and substantially improving the entire World Trade Center site."