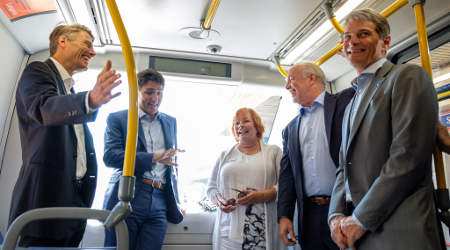 The money will fund construction of the Surrey-Newton-Guildford light-rail project and the Broadway Subway extension of TransLink's Millennium SkyTrain line.

Both projects are part of TransLink's 10-year plan to boost transit options in the Vancouver area.

"Rapid transit is key to helping people get where they need to go quickly so we can meet the needs of a growing region," said Horgan in press release issued by Trudeau's office. "Cutting traffic and getting people and goods moving faster will unlock economic growth while making our communities more affordable, accessible and clean."

The federal government is contributing CA$1.37 billion to the projects, while British Columbia will provide CA$1.82 billion. TransLink and the cities of Vancouver and Surrey will contribute another CA$1.23 billion toward the projects.

The funding stems from an agreement signed this spring by the governments of Canada and British Columbia. Over the next decade, the federal government will provide CA$3.917 billion toward the cost of infrastructure in British Columbia.