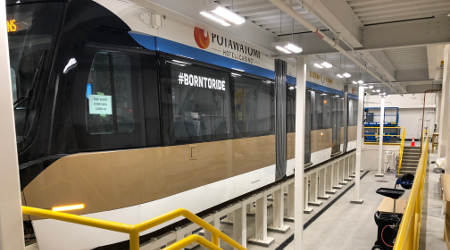 The Milwaukee Department of Public Works (DPW) has completed construction of the initial route of the city's new streetcar system.

The project remains on time and on budget, DPW officials said in a press release.

Brookville Equipment Corp., which is providing five streetcars for the project, delivered the first two vehicles earlier this year.

The remaining three units are slated to be delivered in the coming months, with passenger service slated to start in November, DPW officials said.

Also known as The Hop, the 2-mile route will connect Milwaukee's East Side neighborhood to the Milwaukee Intermodal Station in the downtown.

"The substantial completion of construction is a cause for celebration and a major milestone on the path toward bringing streetcar service to our city," said Milwaukee Mayor Tom Barrett.