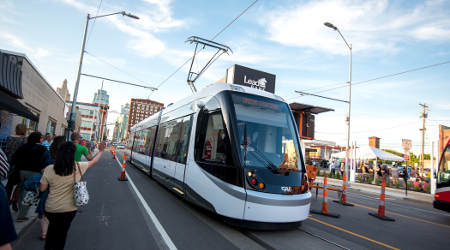 The Ramsey County Board of Commissioners in Minnesota yesterday endorsed a plan to build a 12-mile streetcar line connecting downtown St. Paul, Minneapolis-St. Paul International Airport and the Mall of America in Bloomington.

The project calls for construction of nine stations along State Highway 5. The cost to build the line ranges from $1.4 billion to $2 billion. Construction could start as soon as 2028, Ramsey County officials said in a press release.

The Federal Transit Administration would be asked to cover half of the project's costs, the Star Tribune reported.

Hennepin County, the cities of St. Paul and Bloomington, and the Metropolitan Airports Commission have passed resolutions in support of the locally preferred alternative route for the streetcar line. Project staff may now begin the environmental review, design and engineering process.