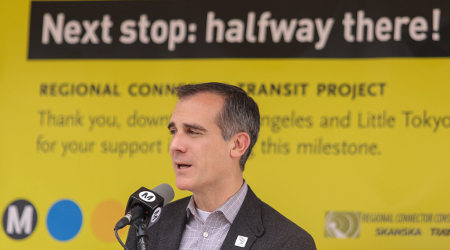 The agency marked the milestone at a May 19 public event, which included construction site tours, according to a Metro press release.

The Regional Connector will be a 1.9-mile underground light-rail tunnel connecting the Blue, Expo and Gold lines in downtown Los Angeles. The project is designed to provide a one-seat ride across the county.

The Regional Connector is expected to save commuters up to 20 minutes in travel time by reducing the need to transfer when traveling to and through the downtown area.

In January, Metro completed the twin tunnels for the project. Construction now has turned toward finishing three underground stations and the last portion of a rail tunnel under Flower Street.

The Regional Connector is slated to open in December 2021.