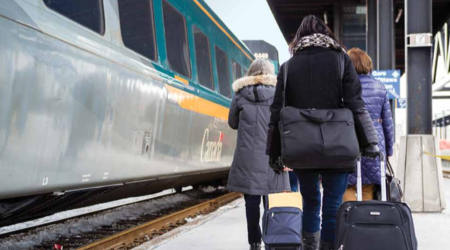 That increase marked the railroad's greatest year-over-year growth in ridership in the last decade, VIA Rail officials said in a press release.

Also last year, VIA Rail boosted capacity by 5.3 percent to accommodate an increase in passengers. The railroad improved added new stops in the Quebec City-Windsor corridor and provided more departures on its Ocean route over the holiday season, the report stated.

Over the year, the railroad invested CA$40 million in 60 capital projects at maintenance centers and stations.

Despite the ridership and revenue gains, VIA Rail Chair Francoise Bertrand acknowledged that the railroad continues to "experience delays that frustrate both our passengers and our own employees."

"Though often caused by railway traffic or other circumstances beyond our control, we are still working to reduce or eliminate them," Bertrand wrote in the report's introduction. "And we are always striving to improve the travel experience for our passengers."

For instance, last month, VIA Rail issued a request for qualifications for a supplier to replace its fleet operating along the Quebec-Windsor corridor.