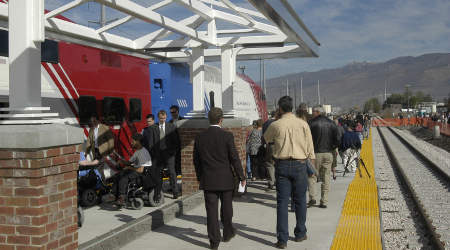 Since the system opened on April 26, 2008, it has served more than 31 million riders. In 2012, the initial FrontRunner system was expanded with eight new stations between Salt Lake City and Provo.

"The fact that UTA is operating FrontRunner by ourselves is a significant accomplishment that is not an industry norm," said UTA's Commuter Rail General Manager Bruce Cardon in a press release. "Because of our ability to train our own people and develop our own system, I'm confident that this is the nation’s lowest cost commuter rail system when you look at cost per service mile."

As for FrontRunner's future, UTA's first priority is to finish installing and activating positive train control, which is scheduled for completion by year's end.

The agency also hopes to acquire funding and property needed to double-track the system. Adding a second track would enable the agency to increase service frequency and reduce systemwide delays, UTA officials said.

UTA also is exploring electrifying FrontRunner and expanding the system from Santaquin to Brigham City, Utah.