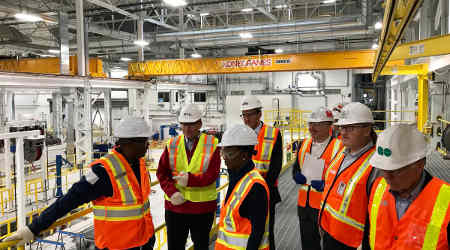 GO Transit's new rail maintenance facility in Whitby, Ontario, is slated to be completed by the end of 2017, the Ontario Ministry of Transportation announced late last week.

The 500,000-square-foot facility will provide maintenance, repair, cleaning and storage  for 13 trains. The CA$859.2 million shop is being constructed to achieve Leadership in Energy and Environmental Design gold certification, officials from the ministry said in a press release.

"The Whitby rail maintenance facility construction is progressing on time and on budget. This facility will support the expansion of GO rail service, including our Regional Express Rail program," said Ontario Minister of Transportation Steven Del Duca.

Construction on the Whitby facility began in March 2015.

The bridge over Fairall Street is designed to improve access for pedestrians and motorists entering and exiting the Ajax GO Station, Ontario Ministry of Transportation officials said in a press release.

Since 2013, the station has undergone a series of improvements, including the addition of a new parking structure and "kiss-and-ride" lot. In 2014, the station's platform and shelters were rehabilitated and a snow melt system was installed.