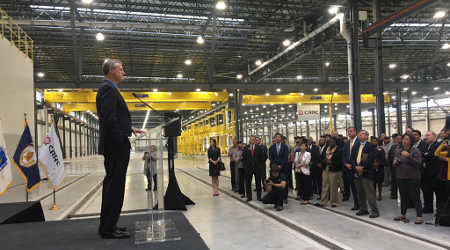 New rail cars for the MBTA's Orange and Red lines will be manufactured at the 204,000-square-foot plant. Full rail-car production is slated to begin in April 2018, with the first units built in January 2019.

CRRC recently received a permanent certificate of occupancy, which marks a milestone toward the $95 million plant's completion, MBTA officials said in a press release.

"The upcoming opening of this state-of-the-art facility represents major investments in the future of public transportation in greater Boston that our customers deserve," said MBTA General Manager Luis Manuel Ramirez.

The plant will include a nearby 2,240-foot test track, as well as a staging and storage area.

In 2014, CRRC was awarded a $566 million contract to design and manufacture 152 Orange Line vehicles and 132 Red Line units.

In December 2016, the MBTA ordered 120 additional Red Line vehicles so it could completely replace the fleet on that line.