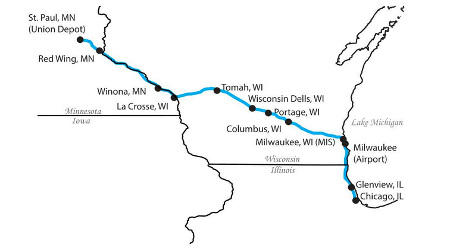 [Editor's update, 3:56 p.m.: Dates for the public meetings have been changed since an earlier version of this story was posted. The Minnesota Department of Transportation informed us this afternoon that yesterday it inadvertently sent out the incorrect dates.]

A "purpose and need" statement has been completed for a proposed expansion of daily passenger-rail service between the Twin Cities, Milwaukee and Chicago, the Minnesota Department of Transportation (MnDOT) announced yesterday.

The proposal calls for adding a second daily roundtrip on the Amtrak Empire Builder route between the Twin Cities, Milwaukee and Chicago (TCMC), with stops at smaller cities along the route.

The next steps in the process involve evaluating alternatives for the project and necessary infrastructure upgrades.

The 418-mile TCMC corridor connects the regions around Minneapolis and St. Paul, Milwaukee, Chicago and provides service to Red Wing and Winona in Minnesota; La Crosse, Tomah, Wisconsin Dells, Portage, Columbus and Milwaukee in Wisconsin; and Glenview in Illinois.

The TCMC corridor now is served by Amtrak's long-distance Empire Builder service that operates between Chicago, Seattle and Portland, Oregon. This service provides one trip per day in each direction.