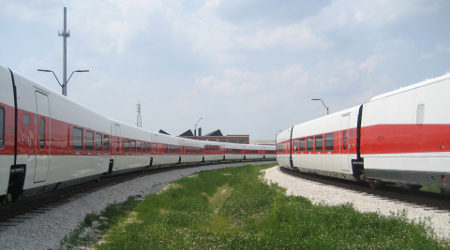 Talgo and Milwaukee Mayor Tom Barrett announced last year that the manufacturer would return to Milwaukee's Century City business park, where it once built high-speed trains for Wisconsin and Oregon.

The company received its first LACMTA rail car at the Milwaukee plant last month. The contract's intent is to maintain the agency's Red Line fleet in a state of good repair, Talgo officials said in a press release.

The contract calls for Talgo to improve the performance of the Metro Red Line A650 heavy rail vehicles (HRV) by replacing and/or overhauling the units' critical systems and subsystems. The A650 HRV fleet consists of 37 A650 married pairs built by Breda Costruzioni Ferroviarie between 1992 and 2000.

"We are excited about the opportunity to expand our business in the U.S. and transfer our extensive expertise in the overhaul business to vehicles owned by LACMTA," said Talgo Chief Executive Officer and President Antonio Perez. "Our Milwaukee facilities will accommodate those 74 vehicles and still have sufficient room for growth. Talgo will show how its 75 years of experience overhauling rail vehicles will be beneficial to transit agencies."

In his 2017 budget address to Milwaukee's Common Council last year, Barrett noted that Talgo could have located anywhere in the United States, especially after Wisconsin state officials pulled out of a contract with the manufacturer to build the high-speed trains.

In 2009, Wisconsin was awarded $810 million in federal high-speed rail funds by the U.S. Department of Transportation under then-Gov. James Doyle. The state contracted with Talgo to build the two trainsets at a plant it leased in Milwaukee's Century City development. Talgo also had the contract to build trainsets there for Oregon.

But in 2010, during his campaign for governor, Scott Walker promised to kill the high-speed rail line if elected. The line would have run from Chicago to Milwaukee and on to Madison, Wisconsin. Prior to Walker's inauguration in January 2011, the USDOT took back Wisconsin's funding and distributed it to other states' high-speed rail programs.

Later, the state refused to pay for the trains Talgo built for Wisconsin's program, and Talgo sued the state.

"Talgo knows its Century City location works well because of its transportation connections, strong infrastructure, and access to a quality workforce," the mayor said last week.